6) Conservation of Upper Cormonachan, the Medieval Settlement and access to the Cormonachan Falls with 2 km of new access paths with four viewpoints from the Contemplation Shelter and joining up with the forest road to the west of the woodlands and a new car park by Cormonachan Burn road bridge to commence in 2021 onwards.

The paths construction cost of this project will now be £253,146.66  (£210,955.55 + VAT at 20%) and up to 95% grant funding should hopefully be available.  The Cormonachan Community Woodlands launched the “Cormonachan Community Woodlands Heritage Project” fund on 8th January 2019 where we have now raised £17,287.24 by 11th June 2021 that includes a local contribution to the project costs of over £12,657.33, meeting more than the minimum of 5% of the construction costs.  Further more donations will be very welcome! Major funding is being sought now that planning permission for the project was received on 11th July 2019. We have so far had to pay out of the fund £756 for planning fees and £400 for a Protected Species Survey. Felling 92 trees along the path and at the Settlement (has been paid for by Forestry and Land Scotland totalling £950) and we have paid £4,165.20 for an Archaeology Survey and £1,260 for an Interpretation Panel with the archaeology and history of the Upper Cormonachan Medieval Settlement (old village), was erected on 4th June 2021 that funding had been received for from the LL&TTNPA’s Heritage Fund. These additional costs amount to £7,556.20 for which grants and donations covered separately. The total project cost is £260,702.86 inc. VAT. See National Park Planning Approval of Construction Costs – 2019 0001 DET Path Construction And Upgrading Works Method Statement 100336689 – See full detailed costing link in 5) below.

The expansion of the paths network forms part of the Loch Goil Local Plans and that of the National Park’s plan:- Loch Goil Local Plan 2018-2023. Theme 1: Community – Priority 2: Continue to preserve and promote the heritage and culture of Lochgoil and Carrick Castle (Upper Cormonachan Settlement (old village)); Priority 6: Promote healthy activity for young and old, including walking. Theme 2: Environment – Priority 3: 1) Maintain and extend the paths network; 2) Provide and maintain proper signage for paths; 3) Support the woodlands management plan for Cormonachan Woods; 4) Support local initiatives which provide access to the environment; 5) Continue to eradicate invasive Non-Native Species (Rhododendron ponticum) being supported with grants from the National Park; 6) Ensure that water quality and biodiversity both in Loch Goil and in the local rivers and streams continually improves (we are creating 5 bridges over burns for the paths in the woodlands to safeguard water supplies to local houses; 7) Support the development of a Land Management Forum in the area. Theme 3: Roads, Traffic and Transport – Priority 2: Promote the correct use of passing places and provide appropriate signage. Theme 4: Economic Development – Priority 1: Provide opportunities for training (we have provided training for local people in First Aid, Trimming, Chainsaws, Pesticide Spraying & ATV driving); Priority 2: Improve tourist facilities: 1) Encourage and support more outdoor leisure businesses (we are trying to create a new local tourist destination (opening up the waterfalls, old village, viewpoints and extended paths for walkers with another car park); 2) Provide information for tourists, including signage and interpretation; 3) Promote other heritage initiatives. 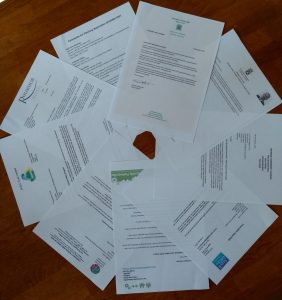 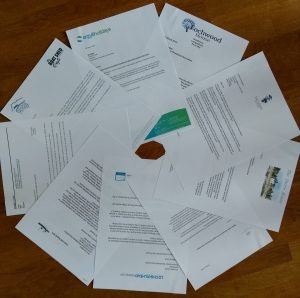 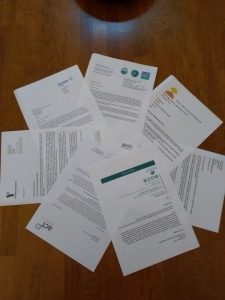 Letters of Support for the “Cormonachan Community Woodlands Heritage Project”.

Over this last year 425 native trees have been planted in Cormonachan Woodlands with a further 150 being planted in November 2021. This has also been supporting the BBC CountryFile ‘Plant Britain’ project and our volunteers have been shown on BBC1 TV  on 3rd January 2021. 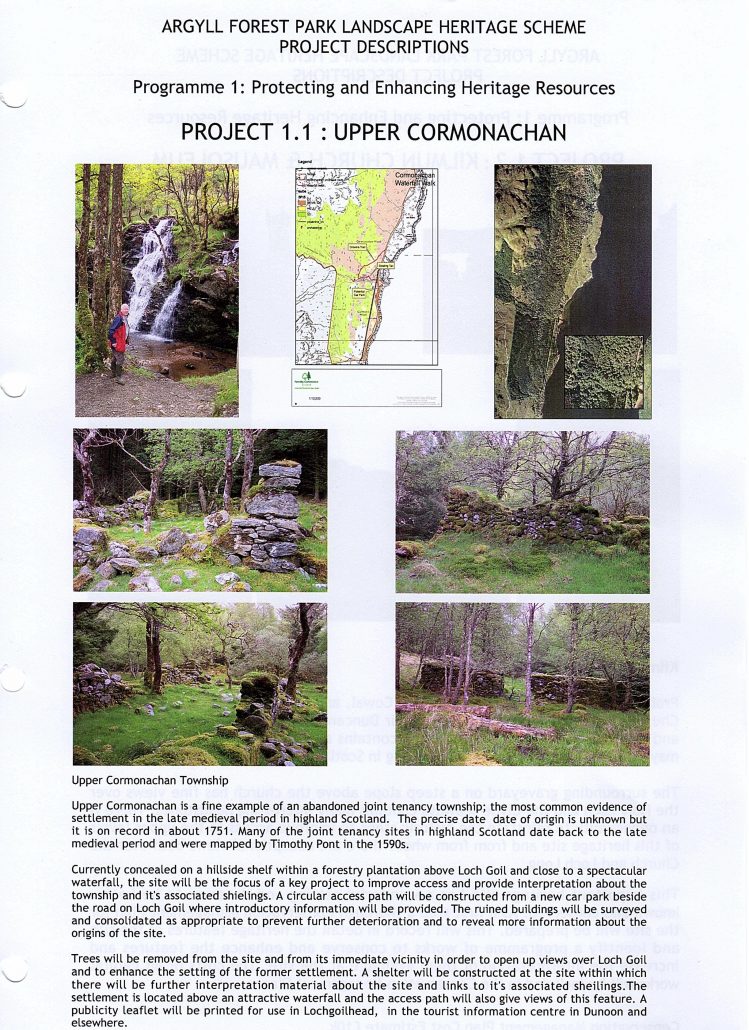 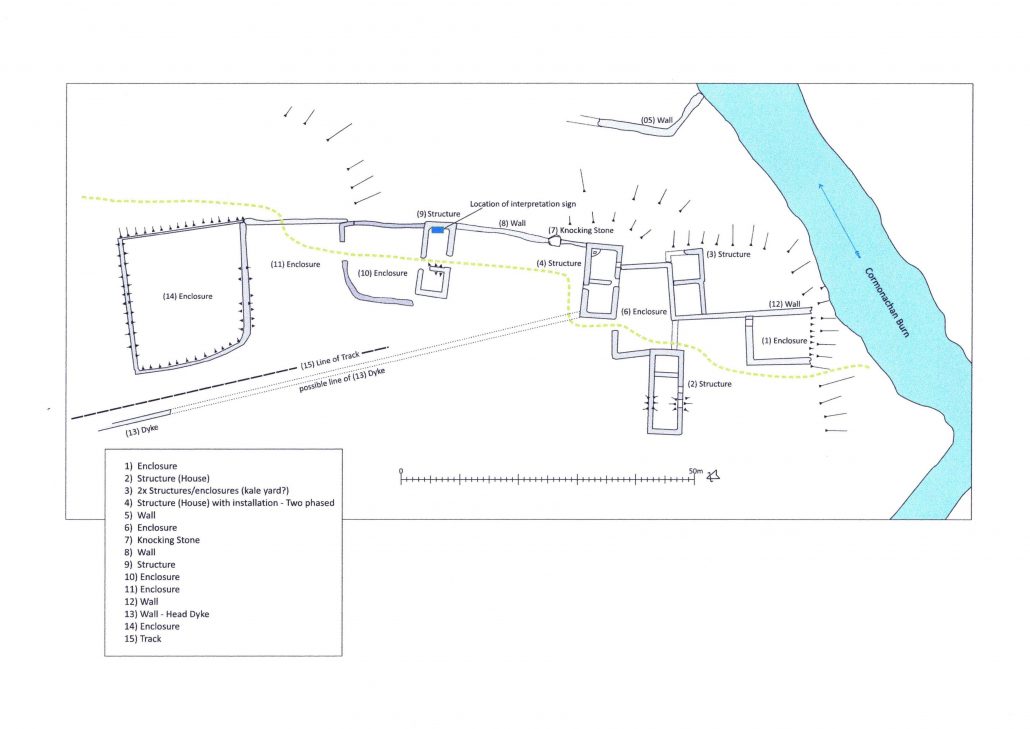 Archaeologist’s final drawing on 16th July 2020 of the Medieval Settlement layout. This has been approved by WoSAS.
The archaeologist’s report can be read by clicking on this link below:-
http://www.cormonachan-woodlands.co.uk/admin/wp-content/uploads/2020/08/Cormonachan-archaeology-report2.pdf 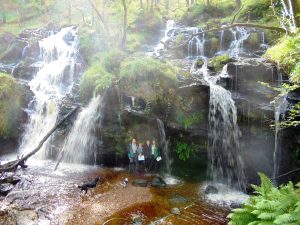 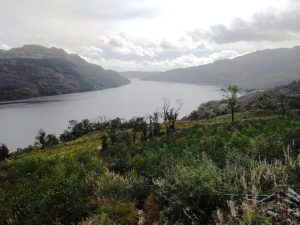 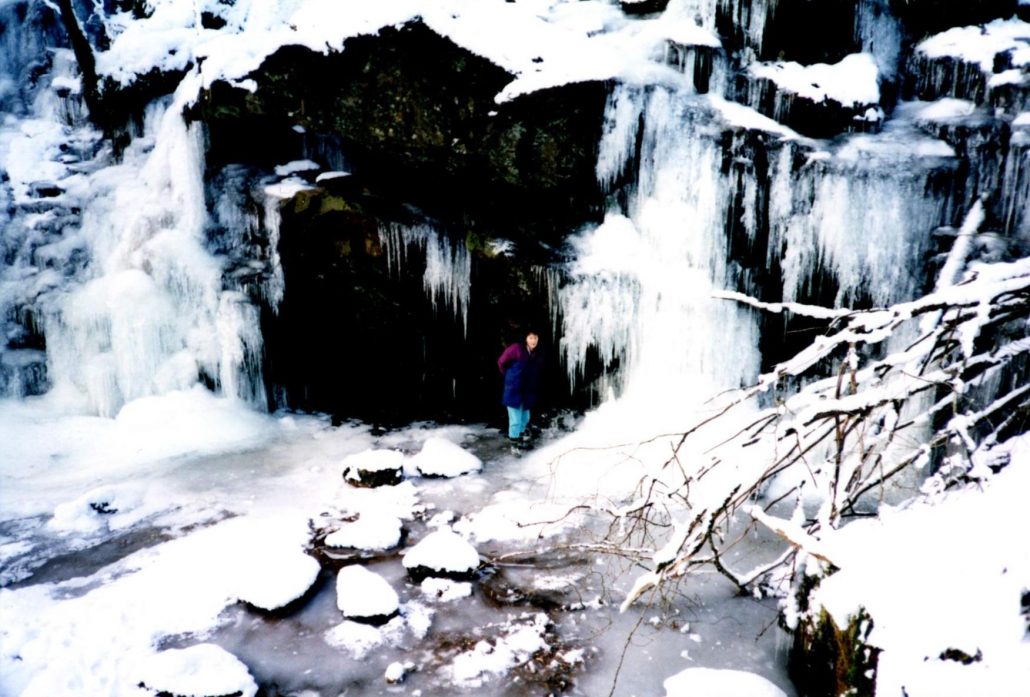 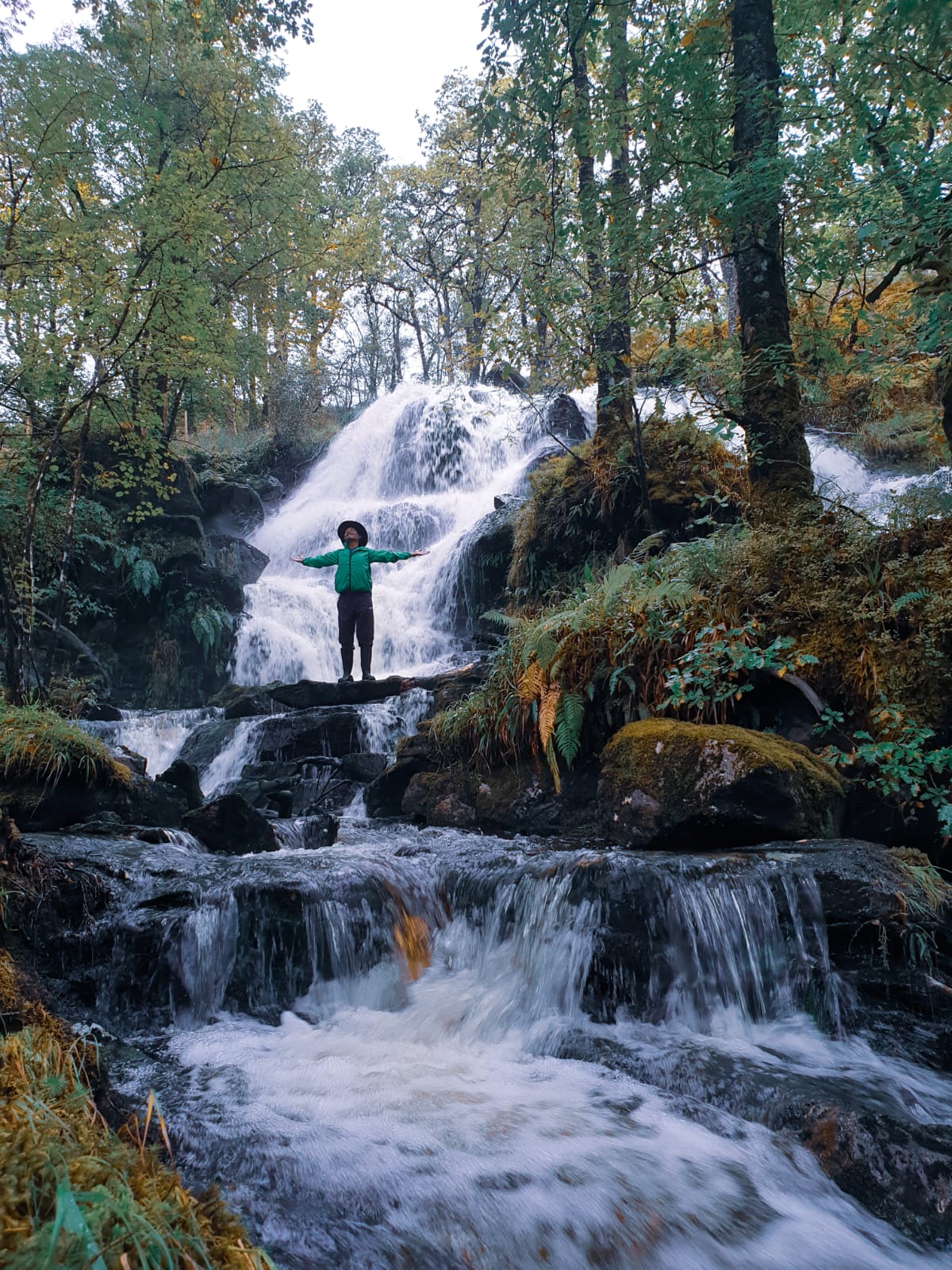 Video of Cormonachan Falls from the Air!
Click on the below link to watch the video… 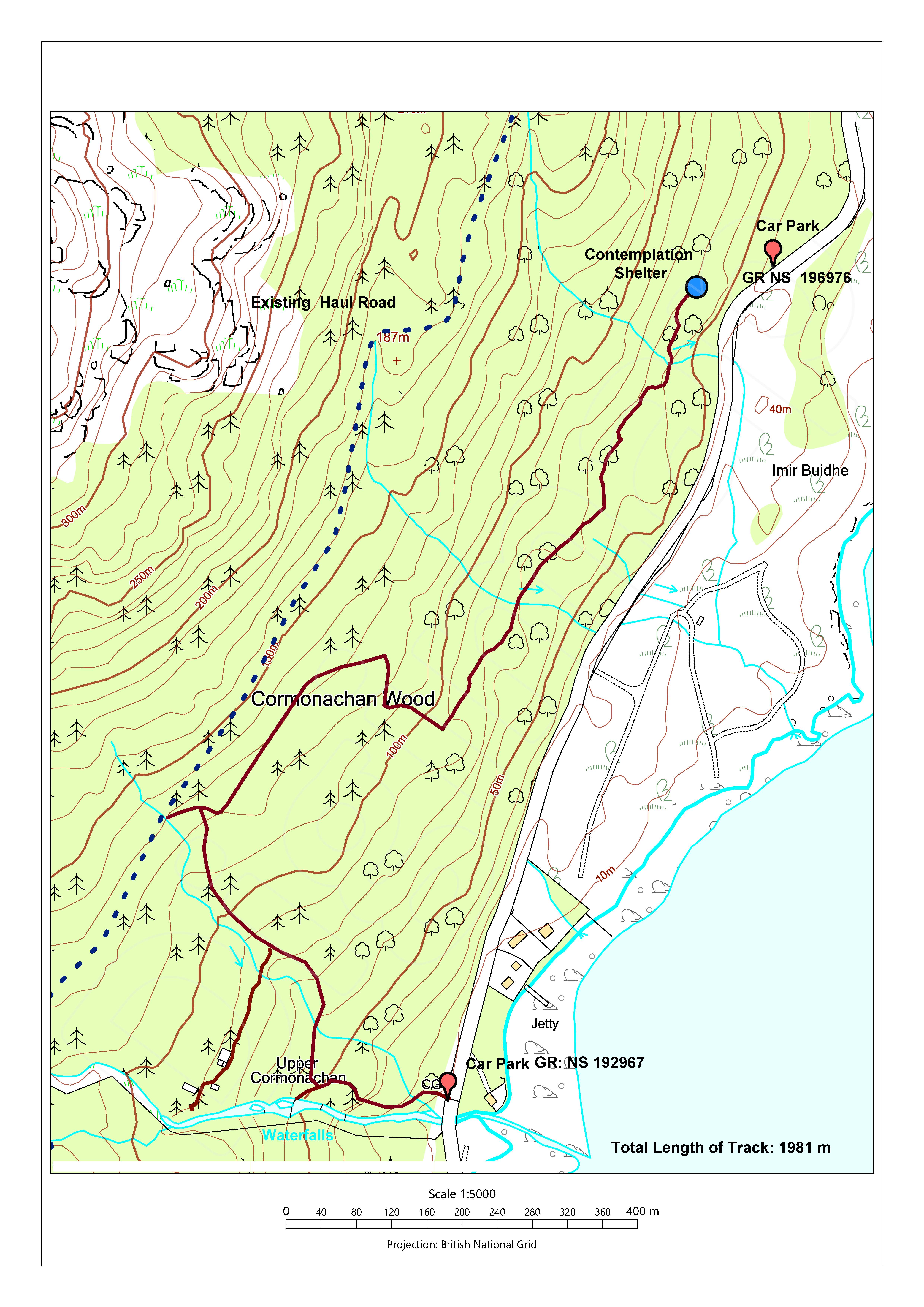 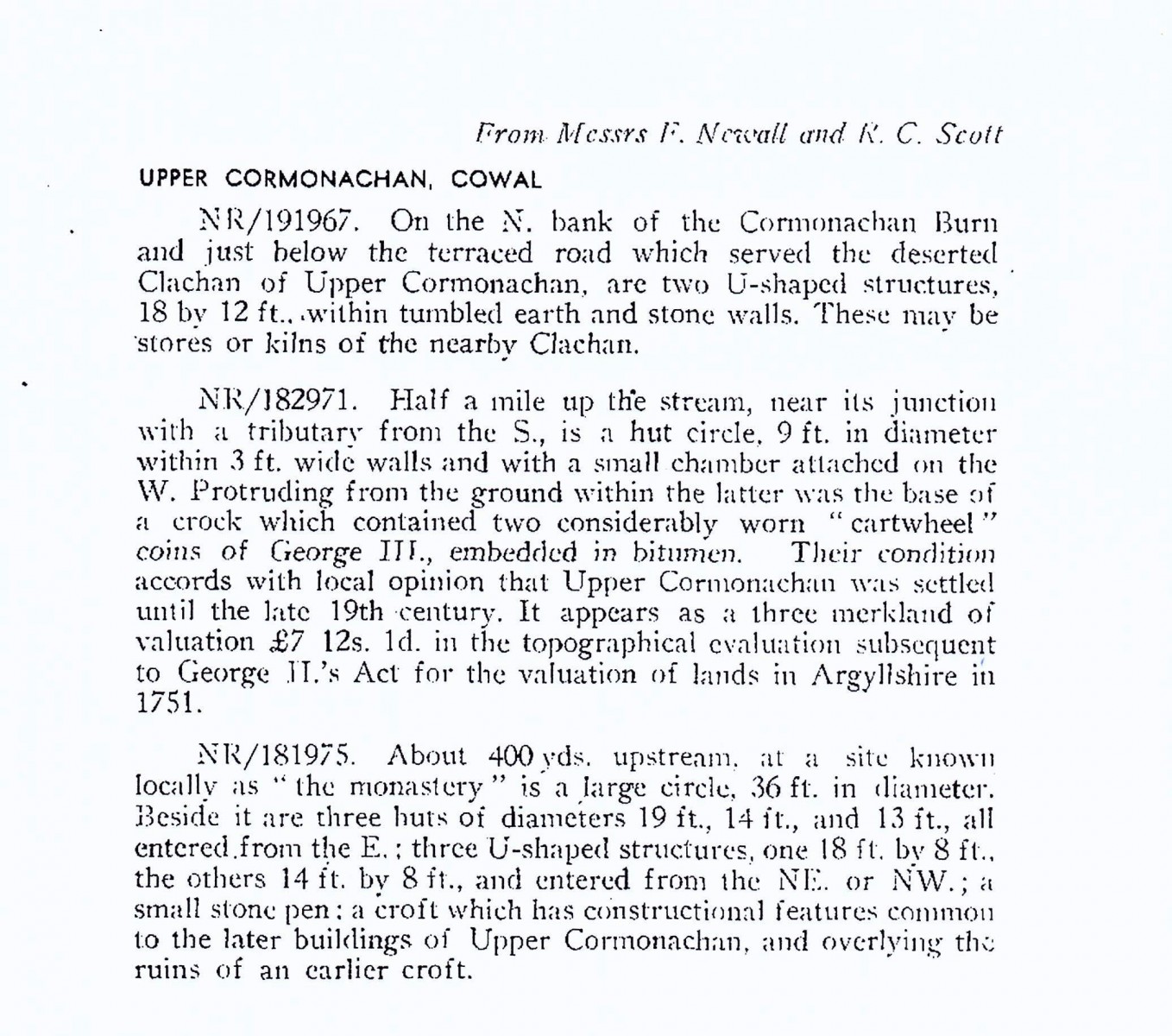 5) Obtain quotations and design for the proposed 2 km of paths from Cormonachan Burn Bridge to Upper Cormonachan old village and the Waterfalls and the Contemplation Shelter in 8 sections including 5 bridges, 4 view points and a new car park.
(Final version achieved on 20th May 2021) 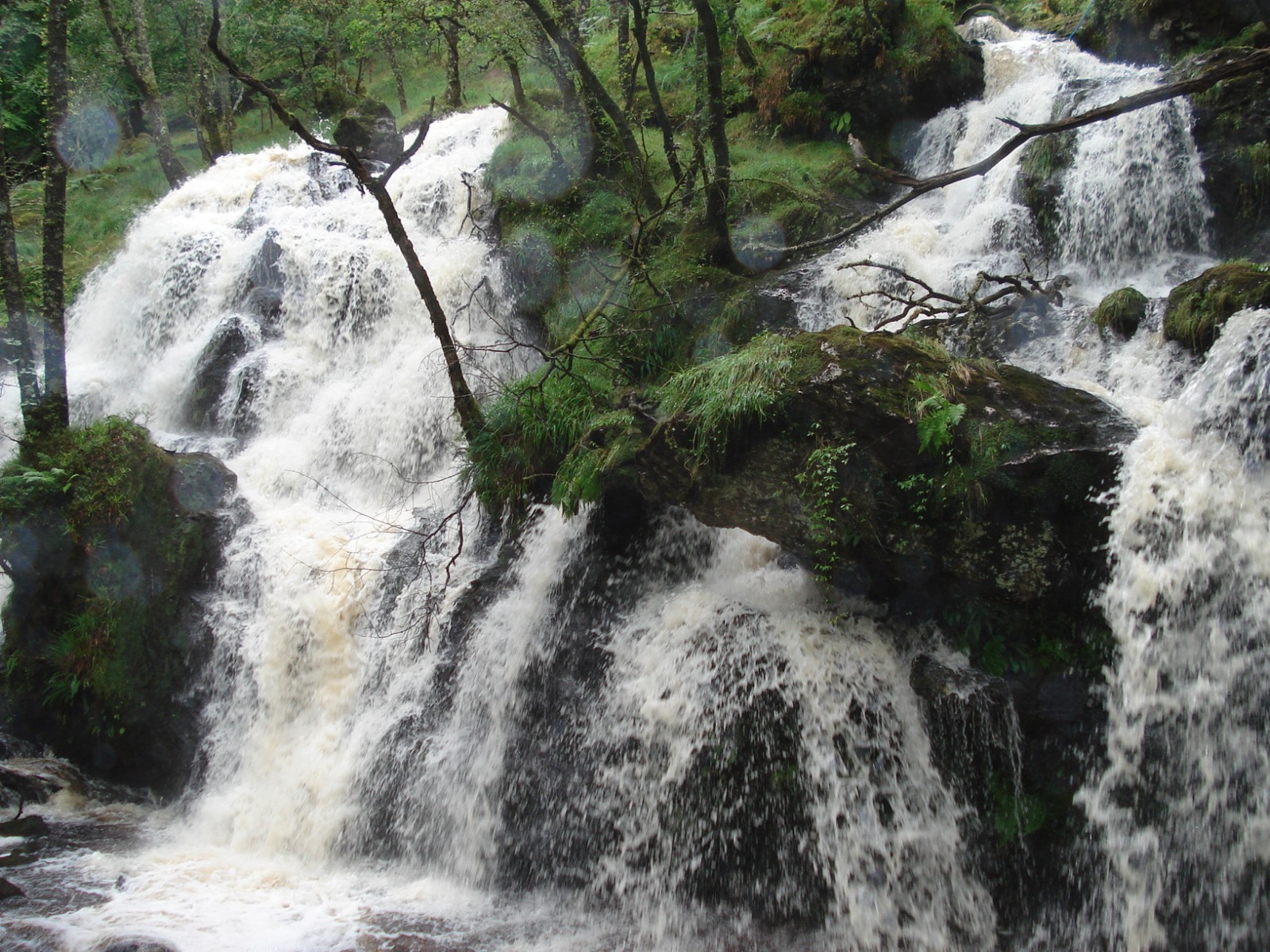 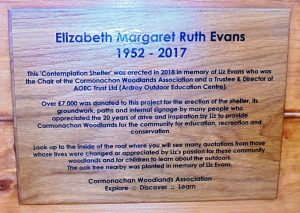 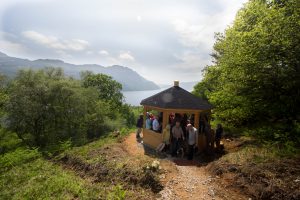 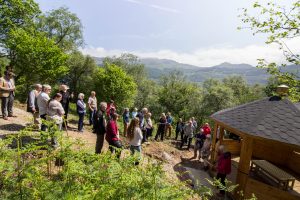 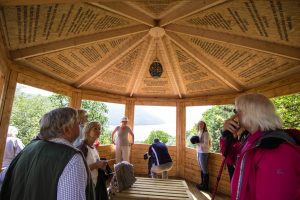 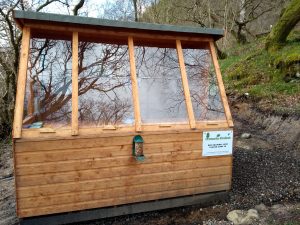 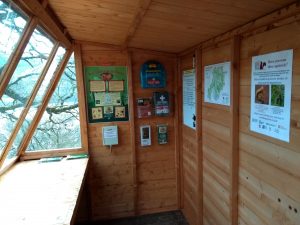 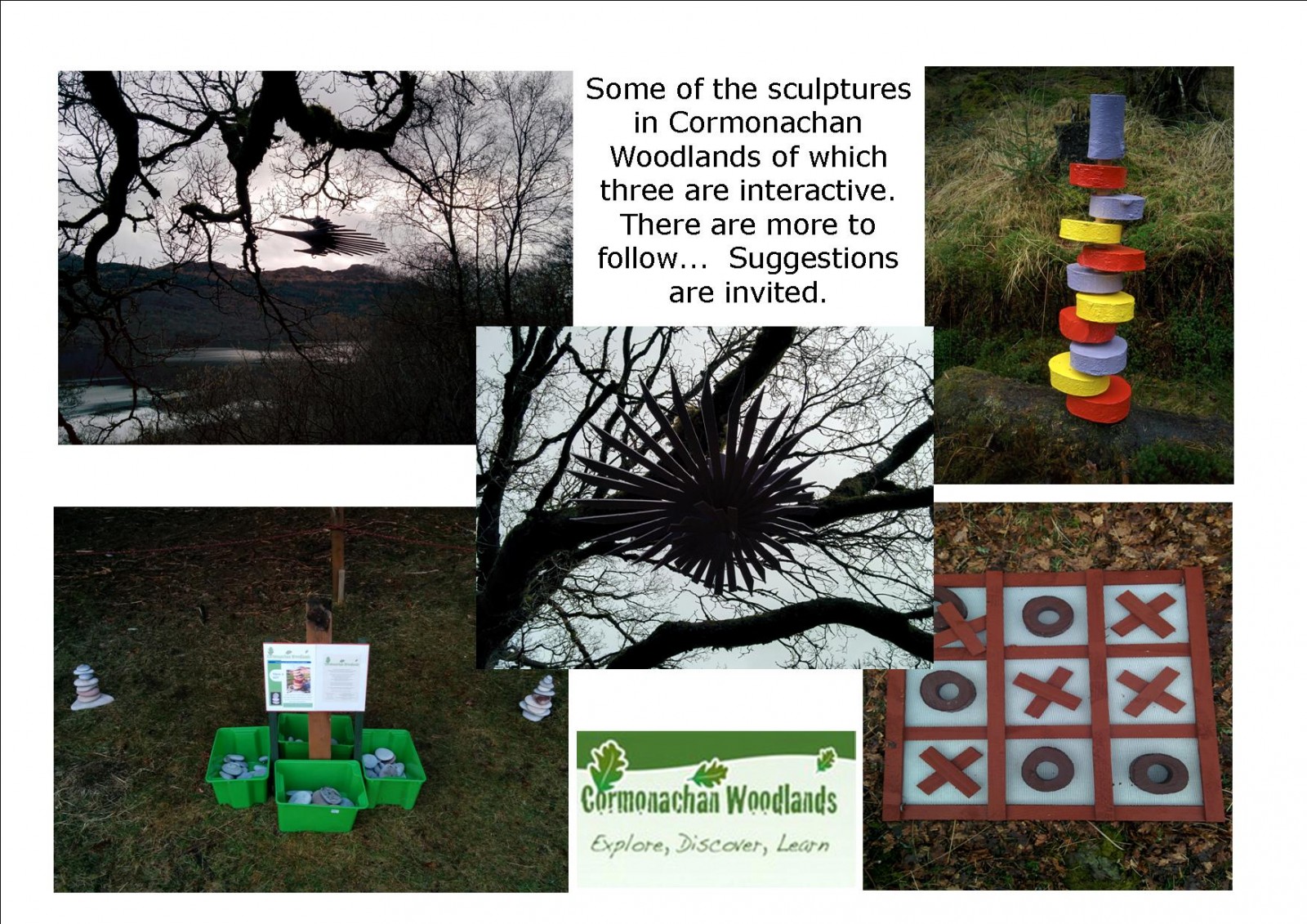 Four interactive and hanging sculptures around the paths 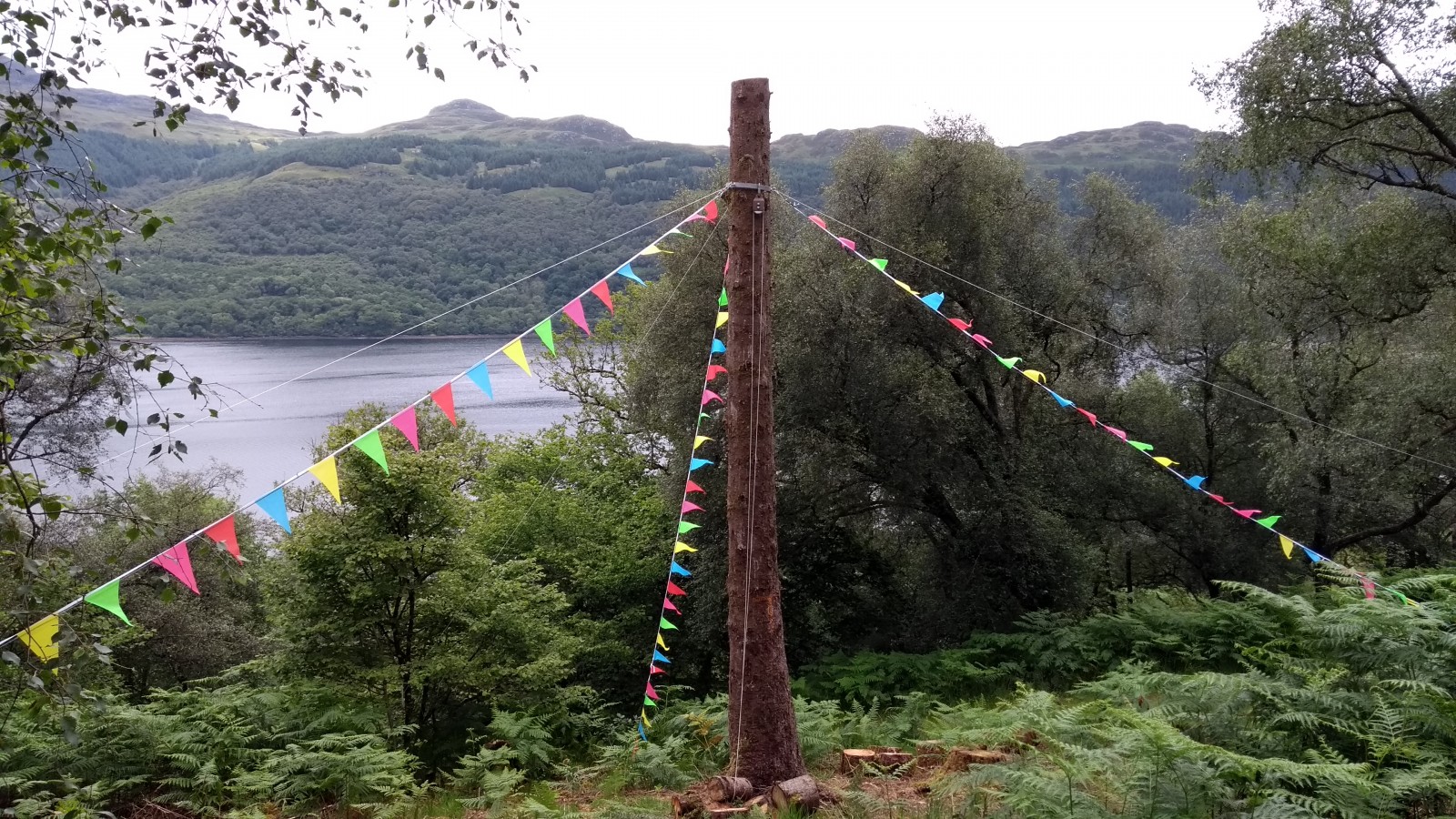 Bunting on the Totem Pole on the Squirrel Trail 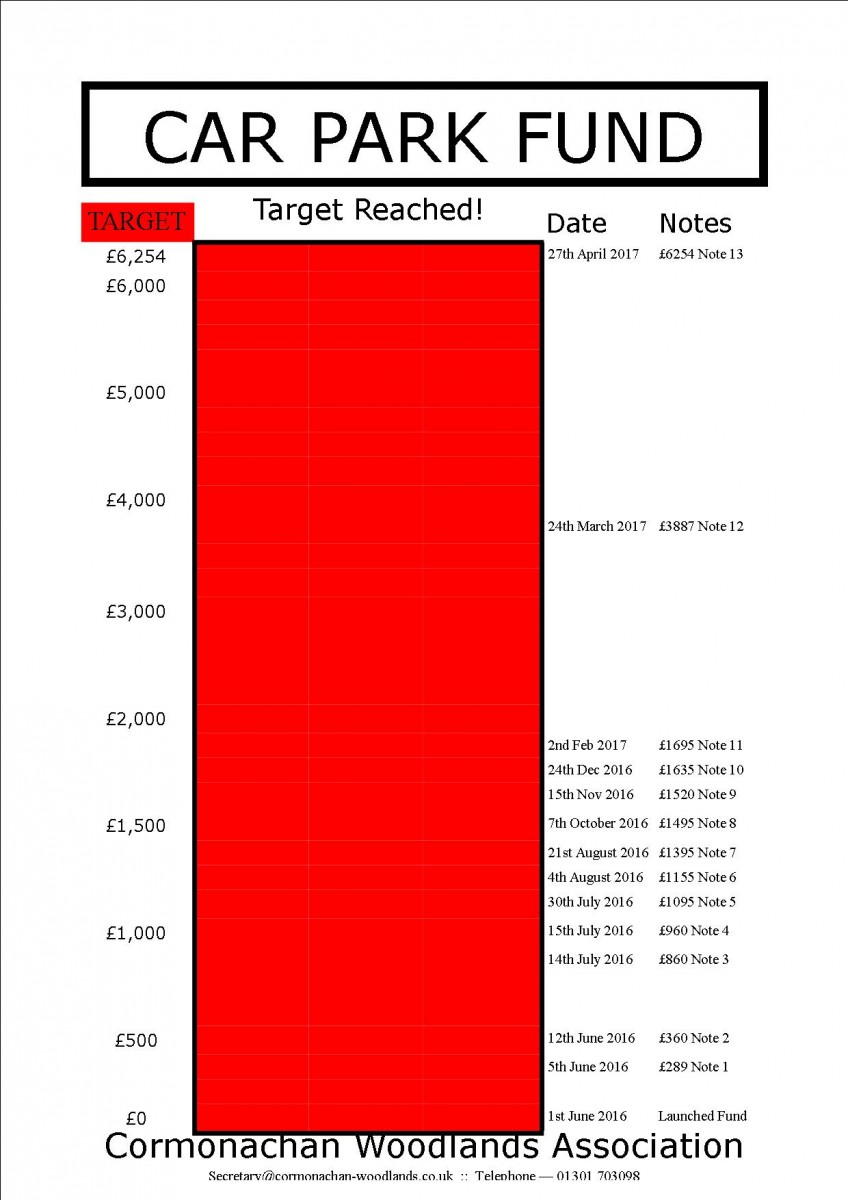 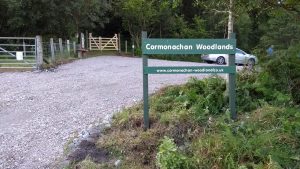 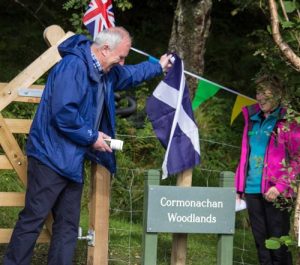